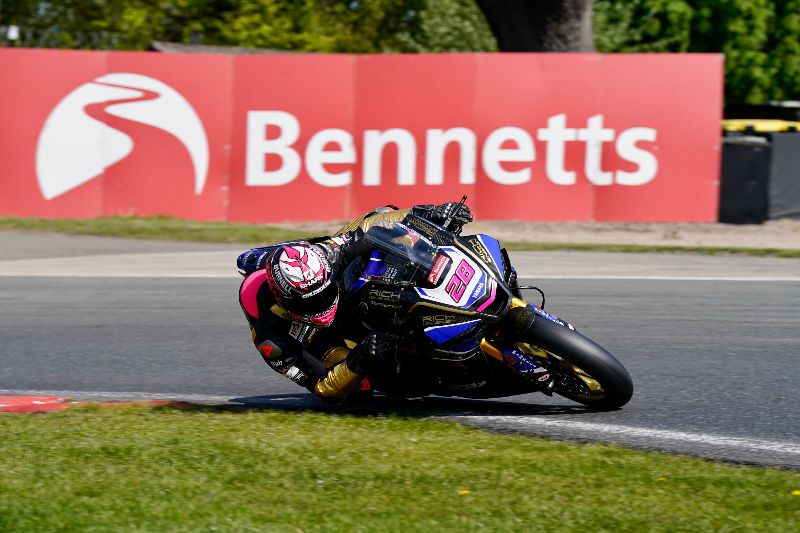 Ray leads the way to top SUPERPICKS Free Practice with fastest ever lap of Oulton Park.

Bradley Ray heads into tomorrow’s opening race at the second round of the Bennetts British Superbike Championship at Oulton Park as the rider to beat after topping the SUPERPICKS Free Practice times with the fastest ever lap of the Cheshire circuit.

The Rich Energy OMG Racing Yamaha rider’s lap from the morning session was not beaten in the afternoon as conditions changed, with his time of 1m:33.736s, 0.22s under the previous best lap set by Jake Dixon during qualifying in 2018.

Lee Jackson set the second fastest time with his best lap posted in the early stages of the second session. The FS-3 Racing Kawasaki rider also dipped under the lap record to move ahead of Peter Hickman on the FHO Racing BMW who completed the top three.

Tommy Bridewell, a winner at the circuit last season, was fourth fastest for the Oxford Products Racing Ducati team, narrowly ahead of Jason O’Halloran on the McAMS Yamaha. His teammate and reigning champion Tarran Mackenzie remains sidelined through injury, he underwent an assessment with the BSB Chief Medical Officer Dr Heike Romer this morning and was declared unfit to participate this weekend.

Rory Skinner was sixth fastest on the second FS-3 Racing Kawasaki, the Scot holding a 0.002s advantage over championship leader Glenn Irwin at the end of the opening day’s action at Oulton Park.

Christian Iddon led the Buildbase Suzuki charge in eighth place, just ahead of 2018 champion Leon Haslam on the VisionTrack Kawasaki.

“It has been a good day to be fair! I was quite surprised with the fastest lap to be honest. Obviously, we did the fastest lap in testing last week, but we didn’t really expect to be straight out on the money breaking the lap record in FP1, but I felt really good.

“We tried a few things in FP2 with the bike, but we didn’t really do any sort of time attack or anything like that as the weather was a bit iffy, but all in all I am very happy.

“I think we’ve got a good base for the bike now and we can work with that going into tomorrow’s free practice, qualifying and race.”